To share your memory on the wall of John Kubiak, sign in using one of the following options:

John Kubiak (a.k.a. JEK) passed away peacefully on November 4th, 2020. He was the only son of the late Jozef and Hilda Joan Kubiak. John was born in Rixton, England and immigrated to Canada with his parents in his early teens. The family settled in Lindsay, Ontario. His grandparents (Joe and Ada Gibbs) then followed their only daughter and grandson and immigrated from England to Lindsay to be with them.

John was deeply loved and will be greatly missed by his wife Janey, their dog Lina, his mother-in-law Neil, father-in-law Bud and his sister-in-law Tracey.
John loved life and as some people would say he was a larger than life character. He was known for his humour, when he walked into a room, he would press “P” for personality, and you knew he had arrived. As an only child, his friends became his family and he maintained many life-long friendships.

John graduated from Ryerson in Architectural Technology. He moved to Toronto for work and maintained his connection to Lindsay throughout his life. John worked in the Commercial Construction industry. He was involved in large building projects in Canada, United States, Middle East and Europe. John enjoyed his profession and the friends and colleagues he maintained throughout his life. Thank you to his friends and colleagues at Infrastructure Ontario, where he was a consultant up until this year, along with his long-time friends in the construction industry who have all called and wished him well during his illness.

John was a sailor during his life and enjoyed being on the water, he treasured his trips to the Caribbean to sail and visit with his friends. He loved his many trips back to England throughout his life and in particular London, where he had tea at the Palm Lounge, went to see plays at the theatre, bought the latest style in flat caps, experienced London’s restaurants, and enjoyed walks in Hyde Park and along the Thames. He liked to quote “if you were tired of London you were tired of Life.”

Thank you to John’s life-long friends who touched his heart and cared about him, Helen, Bonnie, Arnold, Ian, Lizzie, Gord, Laura, Tom, Roly, Brad, Tony, Peter and Margaret. Thank you to his neighbours in Lindsay, Wayne and Cathy who have been so kind.
John was the chef in the family, he loved good food and restaurants, he maintained that to make him happy all you had to do was feed him. He was greatly loved by his wife. They enjoyed their many holidays trips, restaurants, Sunday dinners at home together and the dogs they shared together over John’s life, Theo, Nike and Lina.

Thank you to the doctors at Sunnybrook in particular Drs. C. Law, D. Selby and a special thank you to John’s nurses at Sunnybrook’s Palliative Care Unit for their care and kindness to John over his last few weeks.

Due to COVID a private funeral and burial has taken place at the Riverside Cemetery in Lindsay where John was buried with his parents. Online condolences may be made through Mackey Funeral Home in Lindsay where photos of John will be shared at https://www.mackeys.ca/. John supported the Salvation Army in Canada, Amyotrophic Lateral Sclerosis Society of Canada, Clearwater Farm and Speaking of Dogs Rescue. If you would like to make a donation, please make one to the charity of your choice.

To those of you who knew and loved John, raise a glass of champagne (John’s choice was Veuve Clicquot) or have a cup of tea (John loved his Red Rose tea with lots of sugar), enjoy a good meal with your loved ones and say a toast to John – John has left the building.
Read Less

Receive notifications about information and event scheduling for John Kubiak

We encourage you to share your most beloved memories of John Kubiak here, so that the family and other loved ones can always see it. You can upload cherished photographs, or share your favorite stories, and can even comment on those shared by others.

Posted Nov 18, 2020 at 02:57pm
John Kubiak was a close friend of Roly & Bradley Nicholls for many years. He was also well known and appreciated by many of his co workers in the construction industry in Ontario.
John spent a great amount of his holiday time at his favorite places in London, England and also sailing in the Caribbean.
He will be remembered by all.
A great thank you to Janey for all the attention and kindness you extended to John.
Roly and Bradley Nicholls
Comment Share
Share via:
LG

Posted Nov 17, 2020 at 09:40pm
I, too, met John at Milne & Nichols while doing 'temp' work there one summer in the early 70's. My parents, who had immigrated from the UK in the 50's, adored him. 'Lucy', my mother, particularly admired and approved of his dapper style, his ability to play bridge and his love of Red Rose Tea. It brought me back to another lifetime to see Saracen once again and the amazing sailor cat Alex who had the ability to remain 'on board' with his mountain goat skill of remaining upright even when Saracen was within inches of a smackdown. John had the remarkable ability to maintain connections that mattered to him and would turn up unexpectedly at rare intervals over the decades, more often to have tea with Lucy & Jim or with my sister, Ali. Thank you to Ian and Liz for helping to get me caught up with his last decade or two. That he had met the love of his life and married Janey rounds out perfectly a life lived fully. The world is decidedly less without him. My deepest sympathy goes out to Janey. Unfortunately, I do hot have a bottle of Bristol Cream Sherry on hand with which to raise a glass in John's honour tonight and will have to settle for Bailey's Irish Cream instead. John would not have approved! 'Til we meet again, John,

Posted Nov 17, 2020 at 09:19am
My condolences to Janey and her family. Was extremely saddened to hear of the turn of events that had taken place since the last time I had spoken to John which was the end of September. I will definitely miss John. He was a good friend to me, as I hoped I was to him. He was quite the character, especially at work. Always brought a laugh to your day. I will miss our chats with one another and seeing him walking around the office striking conversation with everyone he crossed paths with. Thank you for the laughs, the stories and life advice you gave me over the years. I will cherish them all. Rest in Peace John.... you will be dearly missed.
Comment Share
Share via:
MG

Posted Nov 13, 2020 at 10:42pm
I am so very saddened to hear of John's passing. I met John in the mid to late 70's when we both worked at Milne & Nichols Construction. We shared a mutual interest in photography, reading, theatre (Noel Coward), travelling and sailing.

Many great memories were made, especially taking pictures in the park (Edwards Gardens near Kirkdale), theatre in Niagara, brunches at the Inn on the Park (even though Kippers were always on the menu) and boat shows, sailing and spending time with Ian and Lizzie and his beloved cat Alex (who ruled the roost).

John was a consummate gentleman, charismatic and full of laughs. He adored his Mum and Dad and was a very loyal friend and coworker to all.

Although, as often happens, time passed and John and I lost contact about 10 years ago, I shall always cherish my memories of him and the good times had.

I send to you and your family/friends my deepest condolences Janey.

Rest in peace my dear friend. You shall be missed.
Marilyn Godfrey (nee Stewart)

Posted Nov 13, 2020 at 10:42pm
I am so very saddened to hear of John's passing. I met John in the mid to late 70's when we both worked at Milne & Nichols Construction. We shared a mutual interest in photography, reading, theatre (Noel Coward), travelling and sailing.

Many great memories were made, especially taking pictures in the park (Edwards Gardens near Kirkdale), theatre in Niagara, brunches at the Inn on the Park (even though Kippers were always on the menu) and boat shows, sailing and spending time with Ian and Lizzie and his beloved cat Alex (who ruled the roost).

John was a consummate gentleman, charismatic and full of laughs. He adored his Mum and Dad and was a very loyal friend and coworker to all.

Although, as often happens, time passed and John and I lost contact about 10 years ago, I shall always cherish my memories of him and the good times had.

I send to you and your family/friends my deepest condolences Janey.

Rest in peace my dear friend. You shall be missed.
Marilyn Godfrey (nee Stewart) 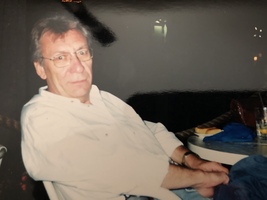 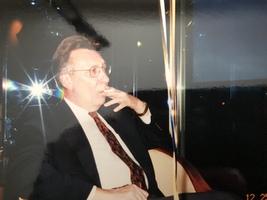