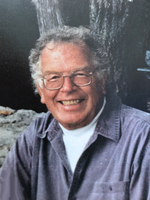 REEVES, Kenneth Edward “Buff” passed away peacefully on January 26, at Caressant Care, Lindsay, in his 94th year.  Buff was a true partner and friend to his wife of 68 years, Joanne (Phillips), a “rock” to his daughters, Julie (Al) and Laurie (Chris), loving Papa to granddaughters, Amanda (Dan) and Carley (Mark), and great grandchildren, Audrey and Elliot.  Brother-in-law to the late Bob Phillips (Dee) and Don Phillips (Helen).  Brother to Stan.  Predeceased by his father, Everett “Buffer” Reeves (1973) and mother, Grace (Nichols) (1995).  Uncle Buff will also be fondly remembered by many nieces and nephews, extended family members and treasured friends.

Buff was an Ontario Hydro employee with over 30 years of service and enjoyed early retirement even longer, which among other things, provided he and Joanne the joy of being grandparents in the young lives of their granddaughters.

Buff and Joanne shared many interests, most of all a love of dance – this was constant through the years and all genres of music.  Buff rarely sat at a dance, and his “expressive” moves bring to mind “dance like no one is watching”.

Buff was young at heart – he appreciated being involved in the lives of his nieces and nephews and he enjoyed friendships with all generations.  Life offered Buff, together with Joanne’s brothers, Don and Bob, the opportunity of building cottages together in the 50s and the three families were blessed for the times shared on Balsam Lake. The September, Labour Day weekend, not only marked the end of summer but was also a celebration of Buff’s birthday which was an excuse to gather all from far and wide to feast and cheer life to its fullest.    Friends and family all took a moment to enjoy the collages of photos that lined the walls of the cottage – years of good times and a testament to a life well lived.

Buff filled his life with experiences with a true zeal, but what endured and captured the nature of this gregarious man was canoeing, and making that conventional slow-moving vessel go very, very fast and for many hours.  He, his paddling partner and dear friend, Ray Healey, and their like-minded competitors and comrades had the enthusiasm of any committed athletes involved in a sport they love.  Their wives, the two “Joannes”, enjoyed supporting their paddling husbands, driving along the riverbanks and lakes of Ontario and once as far away as Hawaii.  Their binders of photos recording the years of marathon races captures a friendship that endures beyond those Glory Years.

Dear friends, including the Ken Grace family, Peter and Doreen Ide, and John and Gayle Galbraith, have not been forgotten nor did they drift away.  They were held close and cherished into his golden years.  Thank you for your steady unwavering friendship.

In his 90th year, life needed to be quieter, so Buff and Joanne decided to make Adelaide Place their new home, and we can’t praise the staff enough for their kind support to both Buff and Joanne during those more challenging times.

The family would also like to express their sincere appreciation to the staff at Caressant Care, Mary Street, for the utmost care and compassion shown to Buff during these tragic pandemic times.

At Buff’s wishes cremation has taken place and although we would dearly love to gather with our friends and family, a Celebration of Life will be postponed due to pandemic issues and held at a later date.  Donations to the Ross Memorial Hospital Foundation would be greatly appreciated. Donations and condolences may be made through the Mackey Funeral Home, 33 Peel Street, Lindsay or online at www.mackeys.ca

All rights reserved. This obituary is also archived at obittree.com