To share your memory on the wall of Frank Robinson, sign in using one of the following options:

It is with much love that the family of Frank Robinson would like to share of his passing on Saturday, September 19th at the age of 92.

It is with much love that the family of Frank Robinson would like to share of his passing on Saturday, September 19th at the age of 92.

Frank grew up on an apple farm near Woodstock, New Brunswick. He met Jean, the love of his life, in 1948 and this year they celebrated their 70th wedding anniversary. In 1959, they packed up their belongings, left the family farm and moved to Lindsay, where alongside his father-in-law, Ralph Smith, he launched what would become a thriving potato business.

Together with Jean, he built a wonderful life in Lindsay, a town they would proudly call home for more than 60 years. There they raised two children, Susan (Rod Malcolm) and Eric; and eventually started several businesses, often in the company of those closest to them. These included a broiler chicken farm, the development of Lakeside Village and launching Robinson Kitchen Farm Equipment. Later, the many associations Frank made during his 23 years of Real Estate were something he thoroughly enjoyed.

Frank was the proud grandfather of Scott (Dana), Katie and Leslie (Kit). His grandchildren, great-grandson Henry and many nieces, nephews and their families were huge sources of joy and he cherished time with them. He is fondly remembered by his sister-in-law Marion Robinson (Carl); and his niece and nephew, Mary Fitsell and Blaine Kitchen of Lindsay and predeceased by his siblings Shirley, Paul (Shirley), Emily Fox (Roy), Betty Kitchen (Ron) and Carl.

Frank will forever be remembered as a man who dedicated himself to his family, friends, Church and work. Frank loved being around people and was quick to share an outstretched hand or warm smile. There is a long list of people who share wonderful memories of time spent with Frank and Jean over the years.

Due to COVID-19 restrictions there will be a private family burial, and a Celebration of Life will be held at a later date. In lieu of flowers, donations can be made to Cambridge Street United Church or the charity that Jean has served tirelessly, The Alzheimer’s Society of Peterborough, Kawartha Lakes, Northumberland and Haliburton. Online condolences may be made at www.mackeys.ca.

Receive notifications about information and event scheduling for Frank Robinson

We encourage you to share your most beloved memories of Frank Robinson here, so that the family and other loved ones can always see it. You can upload cherished photographs, or share your favorite stories, and can even comment on those shared by others.

Posted Sep 30, 2020 at 08:38pm
I want to extend my deepest condolences to the Robinson and Kitchen families for the loss of their father, uncle, and grandpa. Frank was one of the first people I got to know when I came to the Kawartha’s as a realtor/manager with the real estate firm that employed Frank and Betty. A fine, gentle and gracious man, I counted Frank as a friend and mentor. Rest In Peace Frank. Thank you for your kindness.
Comment Share
Share via:
HF

Posted Sep 28, 2020 at 04:32pm
To Jean,
As your Uncle John's family learned of Frank's passing this morning, I am sure that we are each recalling fond memories of you & Frank as well as of our Uncle Ralph & Aunt Eva. Along with the memories of countless Smith reunions , my family remembers well our 1972 visit to the Lindsay Farm and the tour of the chicken barn. Your farm was the first that my children ever visited , Frank made it a fun adventure for them.
You and your family are in my thoughts and prayers,
Hilda Smith Foster
Comment Share
Share via:
SB

Posted Sep 27, 2020 at 03:39pm
Our condolences to you Jean and family Sarah and Shane spoke often of the both of you as neighbours. He will surely be missed.

Posted Sep 25, 2020 at 02:36pm
My sincere condolences to Jean and family. Frank was truly the kindest, sincerest person I knew. He was part of the Century 21 family that I joined when I was in highschool. I worked there after school at the reception desk. Frank was a very well known and respected sales representative. I believe that was the best job I ever had. We had a lot of fun at the office with wine and cheese parties and the parties on the boats in the summer time. We all enjoyed ourselves working together on the many floats for fall and Christmas parades throughout the years. We were all friends and I considered them my extended family. I cherish the many fond memories of Frank and my Century 21 family.
Frank was truly an inspiration to all who knew him. 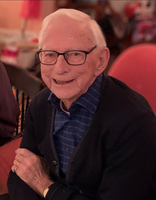